Von Willebrand’s disease is caused by the deficiency of von Willebrand Factor, a plasma protein in the blood required for clotting of the blood.

Mechanism of Blood Clot formation is a complex process. It is the result of a series of

chemical reactions performed by individual molecules called ‘clotting factors.’ Each clotting factor is numbered such that factor I reacts with factor II forming a new substance. This then reacts with factor III forming another new substance, till it goes to factor XII. In Von Willebrand’s disease, the dog is missing or having very low concentration of the substance which is responsible for stabilizing Factor VIII in the clotting process and thus the whole clotting process is hampered. This substance which stabilizes factor VIII is called ‘Von Willebrand’s factor.’

Because of the lack of ‘Von Willebrand’s factor’ or factor VIII, clotting is weakened. Therefore dogs with Von Willebrand’s disease will have excessive bleeding following any injury. These dogs, without proper management, can even bleed to death following a surgery. This condition can be called similar to hemophilia in humans. 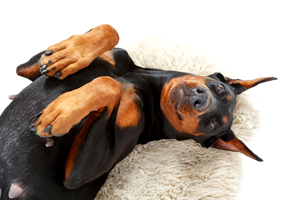 Von Willebrand’s disease is the most common of the inherited bleeding disorders and has been found in a wide range of canine breeds. But certain breeds have shown a higher incidence of vWD than others. It has been found with more frequency in breeds like German shepherds, Doberman pinschers, standard poodles, Shetland sheepdogs, and golden retrievers.

The disease is classified as Types I, II, and III, based on the concentration and nature of ‘Von Willebrand’s factor’ in the blood.

Excessive bleeding is the main symptom. After any injury, wound or surgery, the blood does not clot in the normal time, and bleeding is

In addition to the site of injury, dogs with Von Willebrand’s disease may also develop nosebleeds and bleeding from the gums. They may also pass blood in the feces or urine due to bleeding in intestine or stomach. Bleeding can also occur in joints, causing pain and other symptoms similar to those of arthritis. It may also cause blood loss anemia if there is prolonged bleeding.

Von Willebrand’s is diagnosed through a test, which measures for the level of Von

Willebrand’s factor in the blood. The disease is generally diagnosed by an ELISA test for plasma vWF following a bleeding event. Buccal mucosal bleeding time (BMBT), which measures your dog’s ability to form a small clot, is also a good method.

Von Willebrand’s disease is a hereditary disease. Though there is no prevention or cure for vWF but many dogs with vWD live a long and healthy life. It’s important to carefully watch your dog to prevent unnecessary injuries and bruises. Extra precaution is needed when any surgery is planned.